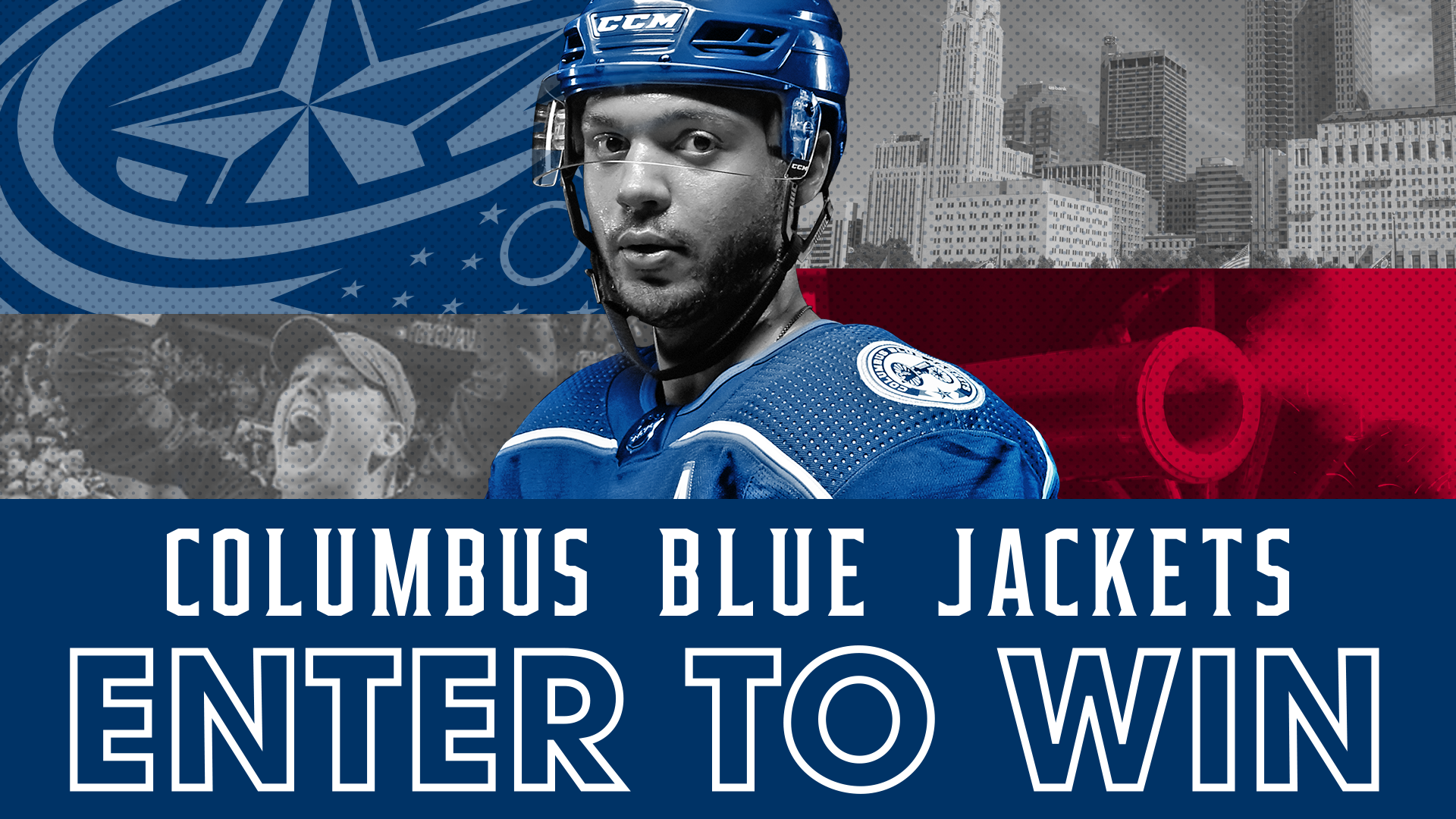 Enter for your chance to win a four pack of tickets to a future Blue Jackets game along with a parking pass and $100 for food & beverage at Nationwide Arena!

NO PURCHASE NECESSARY TO ENTER OR WIN. A PURCHASE WILL NOT INCREASE YOUR CHANCES OF WINNING.

ELIGIBILITY: Participation in the Promotion is available only to legal residents of the state of Ohio. Eligible individuals (“Participants”) must be eighteen (18) years of age or older by the date of entry. Employees of the Columbus Blue Jackets (“Blue Jackets”), Nationwide Arena, the National Hockey League, Columbus Arena Management LLC (“CAM”), the Franklin County Convention Facilities Authority (“CFA”), the Ohio State University (“OSU”) employees who work in connection with Nationwide Arena, and each of their respective parents, subsidiaries, affiliates, directors, officers, governors, successors, assigns, employees, and agents (collectively, the “Released Parties”) are not eligible to enter or participate in the Promotion.  By entering, Participants agree to be bound by these Official Rules and the decisions of the Blue Jackets, which are binding and final on all matters relating to this Promotion. The Promotion is subject to all applicable federal, state and local laws.

HOW TO PARTICIPATE: No purchase necessary. Participants may enter by inputting the required information on the entry form and submitting to enter. The Released Parties are not responsible for entries that are lost, late, mutilated, misdirected, illegible, incomplete entries or late or lost entries due to data or computer glitches. Automated entries are prohibited, as are mechanically reproduced or photocopied entries, and any use of such automated devices and/or copies will cause disqualification. Message and data rates apply. All materials submitted become the property of the Blue Jackets and will not be returned. The Blue Jackets reserves the right, at its sole discretion, to disqualify any individual who tampers with fair participation. This Promotion is void outside of Ohio and where prohibited by law and is subject to all federal, state, and local laws.

DRAWING AND WINNER NOTIFICATION: Winner(s) will be selected at random, in a reasonable time after the Promotion Period ends, from among all eligible entries received during the Promotion Period. Odds of winning depend on the number of eligible entries received. All drawings will be conducted by the Blue Jackets. The Blue Jackets decisions are final and binding.

Winners will be notified by phone and/or e-mail, in the Blue Jackets' sole discretion. Winners may be required to execute and return an affidavit of eligibility, a liability release, and, where lawful, a publicity release within twenty-four (24) hours of receipt. Each Winner's guest(s) may likewise be required to sign such release prior to accepting the prize. In the event that a Winner cannot be contacted via the process above, if such documents are required and not returned within the specified time period, if any prize notification is returned as undeliverable, if any Winner declines the prize, or in the event of noncompliance with these rules and requirements, such prize will be forfeited and an alternate winner may be selected from all remaining eligible entries, if time permits.

Any and all taxes and any other expenses not specifically mentioned herein shall be and are the sole responsibility of each Winner. Each Winner must report income to the IRS.  In the event it is deemed during the verification process that the Winner does not have a unique, personal and valid social security number for the Blue Jackets to report the tax liability associated with acceptance of the prize, such Winner will be disqualified. Valid social security numbers will be determined by IRS requirements.

In consideration for being awarded the prize, each Winner agrees and consents, without further authorization, compensation or remuneration of any kind, to the use of Winner's name and likeness in any and all advertising, promotions and other publicity conducted by the Blue Jackets. Participants agree to the collection of their personal information for the purposes described herein (including the administration of the Promotion) and agree to be absolutely bound by these Official Rules and by the decisions of the judging organization regarding all aspects of the Promotion, whose decisions shall be final. The Blue Jackets reserves the right, in its sole discretion, to cancel or suspend this Promotion.

GENERAL PRIZE CONDITIONS: Certain restrictions may apply to prizes. Prize may not be redeemed for cash value. Prize is nontransferable and no substitutions are allowed except by the Blue Jackets who reserves the right to award prizes of equal or greater value if advertised prize is unavailable for any reason. Transportation, accommodation, food and beverages and any other costs associated with the prize not specifically mentioned in the Promotion are the sole responsibility the Winner. Each Winner agrees that the prize is awarded "as is" with no warranty, representation or guarantee, either express or implied, in fact or in law, whether now known or hereinafter enacted, relative to the use or enjoyment of the prize, including, without limitation, its quality, merchantability or fitness for a particular purpose. The Blue Jackets shall not be obligated to replace any lost, mutilated or stolen prize or any prize that is undeliverable or does not reach the Winner for any reason, including, without limitation, because of incorrect or changed contact information. No more than the stated prizes will be awarded. All prizes legitimately claimed will be awarded.

GENERAL RULES: The Released Parties assume no responsibility or liability for any damages, losses or injury(ies) resulting from any participation and/or any Winner’s or Winner’s guest’s receipt, acceptance, use or misuse of any prize. Any and all taxes related to the prize are solely the responsibility of individual Winner. All prizes are subject to availability and dates are subject to change. Acceptance of a prize constitutes, except where prohibited by law: (i) permission to use Winner’s and Winner’s guests’ names and likenesses in any form of media for publicity purposes without further compensation; and (ii) an express and absolute release of the Released Parties from and against any and all liability, claims and/or actions or causes of action of any kind whatsoever for injuries – including but not limited to paralysis and/or death, damages or losses of any and/or all kinds whatsoever to persons and/or property which may be sustained directly or proximately in connection with any Winner’s participation in this Promotion and/or such person’s receipt, acceptance, ownership and/or use or misuse of the prize(s) awarded and/or while preparing for, participating in, attending and/or traveling to and/or from any prize-related activity.  By participating in this Promotion, each Participant accepts and agrees to be absolutely bound by the foregoing liability release, by all these official rules, and by all decisions of judges, which shall be final. By entering the Promotion, Participant acknowledges that he/she may receive information on Blue Jackets and/or Nationwide Arena news, promotions and tickets.

Furthermore, Participant grants the Blue Jackets express permission to issue such materials to Participant via phone, e-mail, or regular mail. Except where prohibited, the Promotion and Official Rules are governed by and construed in accordance with Ohio laws. Participant agrees and consents that all disputes relating to this Promotion or the construction, validity, interpretation and enforceability of these Official Rules are to be resolved by a mutually agreed upon arbitration body, which holds is proceedings in Columbus, Ohio. The prevailing party in any such arbitration has the right to recover its costs but has no right to recover its attorneys’ fees. The result of said arbitration shall be binding and enforceable in a court of competent jurisdiction. Participant and Blue Jackets waive their rights to jury or bench trial.

CAUTION: ANY ATTEMPT BY A PARTICIPANT TO DELIBERATELY DAMAGE OR UNDERMINE THE LEGITIMATE OPERATION OF THE PROMOTION MAY BE A VIOLATION OF CRIMINAL AND CIVIL LAWS AND SHOULD SUCH AN ATTEMPT BE MADE, THE BLUE JACKETS RESERVES THE RIGHT TO SEEK DAMAGES FROM ANY SUCH PERSON TO THE FULLEST EXTENT PERMITTED BY LAW.

WINNERS' LIST: For the names of the winners, send a self-addressed stamped envelope, no later than one (1) month after the end of the Promotion Period, to: Columbus Blue Jackets, Attn: Sweepstakes, 200 W. Nationwide Blvd, Columbus, Ohio 43215. Only one (1) request per outer envelope will be fulfilled.

COPY OF OFFICIAL RULES: For a copy of these Official Rules, print out these pages or send a self-addressed stamped envelope to: Columbus Blue Jackets, Attn: Sweepstakes, 200 W. Nationwide Blvd., Columbus, Ohio 43215. Only one (1) request per outer envelope will be fulfilled.

We care about your privacy Opt out of targeting | erase your data.

Just like Santa - our campaigns can't work without cookies! A cookie is a simple piece of code that allows us to verify whether or not you're a real person trying to enter this contest. It's very simple to enable cookies, and you're welcome to turn them back off again once you're finished entering.